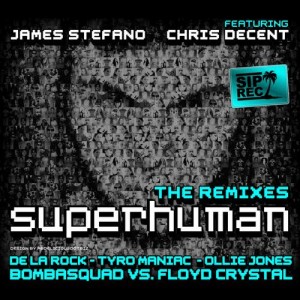 With a strong single like “Superhuman” we came up with an idea to generate 4 quality remixes based on different genres by asking everyone we knew in our network we thought could make the difference.

After a strong preselection of 24 artists which we gave the chance to do an official remix we’ve still had around 10 remixes at the end of the road. We strongly think these 4 remixes are the best in their genres and will give you the chance to make one of these remixes one of your favorites this year.

Bombasquad takes Dubstep to another level, this time they asked upcoming talent Floyd Crystal to bring some edgy rawness into the vocals of James Stefano which makes this remix an absolute musthave fo everybody who love massive drops and the dubstep-ish sound of 2013!

Ollie Jones is on fire with his Superhuman remix and is one you definitely need to have in your electro collection. This young kid from the UK knows how to brings the dirty sound in all his productions. Still making music on his very minimal bedroom set up, things are starting to take shape with big support from artists such as Laidback Luke, Oliver Twizt, Ron Carroll and Static Revenger to name a few.

If you thought 1 electro remix was enough we have another surprise for you, De La Rock flips the tune upside down and creates an uptempo vibe which give you directly the feeling you need to go out instead of watching a boring movie on TV. The drums, kicks and especially the vibe will take you to the next level of electro house. De La Rock’s latest release on SIPREC has btw been released by Carita La Nina, Melvin Reese and the one and only Ron Carroll.

Upcoming Dutch artist Tyro Maniac suprised us from the first moment we’ve listenend to his remix and we knew inmediatly that this one is an official! With his interpretation of the original we just love how Tyro Maniac turned “Superhuman” into a sexy spacey Drum & Bass tune perfect for a 4 a.m. dance floor.

We, … Strangers in Paradise, James Stefano and Chris Decent … are proud to treat you with these remixes which hopefully takes you on a musical journey through different soundscapes of several genres instead of only Progressive House the whole time.