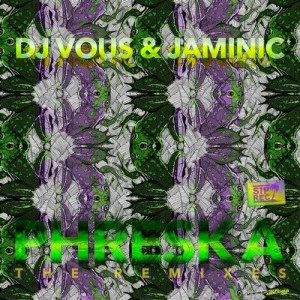 DJ Vous aka Evan Langley has been a lifelong musician. But things wouldn’t become interesting for Evan until he entered the Boston EDM scene after graduating from Berklee College of Music in 2008. First establishing himself as a multi-genre vinyl DJ, Vous soon discovered and embraced the sounds of Dubstep and Disco-House music, a taste which would evolve over the following years into a unique sound that is both focused and without boundaries.

JAMINIC aka Gregory Nickerson began his career in his early teens spinning vinyl & CDJs, then went on to study Audio Production & Technology. It was then that he developed his style of house with elements of deep, tech, progressive and tropical rhythms that brings out a feel-good atmosphere. Vous and JAMINIC met through mutual friends, and found a common ground in production. They combined their influences to create groundbreaking material.

SIPREC proudly presents the official remixes of Phreska done by Chas Bronz, Chris Decent, Funk Disorder, Josh Bernstein, Need & Necessity, Mike Larry and we even have two extra remixes by the masterminds behind this extraordinary tune … still don’t know who? Check the original 😛