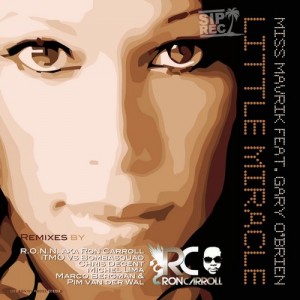 Miss Mavrik comes out with another banger on SIPREC with great vocals from singer-songwriter Gary O’Brien. With heavy hardhitting remixes by the one and only Chicago’s finest Ron Carroll, Chris Decent, iTMO versus Bombasquad, Michel Lima and Marco Bergman promises already to be one of Strangers in Paradise’s biggest releases of 2015.

DJ/ Producer / Former MTV Europe presenter & model, Miss Mavrik holds residencies in Ibiza, Istanbul, Rome, London, Madrid, Moscow, UAE and St Tropez. Playing out renowned superclubs throughout Europe ranging from Pacha to 360. Moving into production was undoubtedly the next step alongside her DJ work. Her first track release was a remix of the Tom Nevile and The Stafford Brothers single “Come my way”. Working alongside Juan Kidd to create a pumping house version of the track which was released on Toolroom Records.

Headlined by a remix from Ron Carroll who needs no introduction  a Chicago based singer, songwriter, producer/remixer, and well respected DJ, is known primarily on the global music circuit. Ron has worked with many of the worlds most famous producers such as Erick Morillo, Roger Sanchez, Bob Sinclair, David Guetta, and Steve Angello. In 2000, friend and producer Mazi introduced Ron to the European house scene and asked him to write and sing on Superfunks Lucky Star. The track blew up worldwide and went on to sell over 3,000,000 copies. His 2008 super hit, Walking Down The Street (Nike Song), was released globally and would also collaborate with Bob Sinclair and Axwell on What A Wonderful World and co-write music with David Guetta and Swedish House Mafia.

Fasten your seat belt and get ready for a joy ride from Amsterdam to Chicago and from Chicago to London!