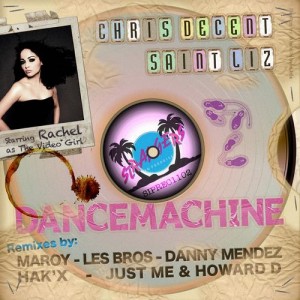 SIPREC’s second release ‘Dance Machine’ is ready to hit the dance floors and will be the festival anthem of 2012 everybody will be talking about … Mark our words!

Chris Decent started his music career at the age of 14 as a drummer in a local band. In 2010 he decided to take his passion for music a bit more serious. It was the sound of Ibiza that immediately draw his attention. After the switch from pop to electronic music Chris Decent released a few tracks under various labels including his two most radio like singles ‘Take my hand’ and ‘Losing Control’.

Chris Decent is well known for his FUNKY sets and his rock/pop influenced productions. Most of his tracks contain a lot of percussion and groovy or even mysterious melodies. This youngster is ready to take over and give the world the funk what it deserves.

Steven van de Lisdonk a.k.a Saint Liz’ had his first touch with electronic music at the age of 13 listening to tracks of Tiesto, Armin van Buuren and Pakito. His bootlegs are already supported by big names in the house industry. And his amazing sounds keeps growing and growing in worldwide clubs and well-known blogs all around the world.

Chris Decent just signed a 5 single deal with SIPREC and is ready to concur the world with his breathtaking electronic soundscapes that will blow your ears away! Dance Machine is a track that ticks all the boxes in the SIPREC philosophy. It contains the uplifting Miami sound with a mix of Ibiza’s cutting-edge noise and the warmth of Morocco’s Red City Marrakech!