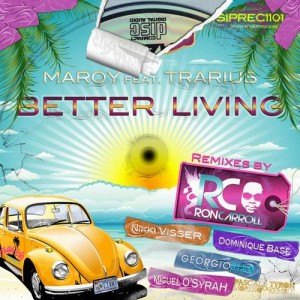 Strangers in Paradise (SIPREC) is a brand new record label, dedicated to bring quality electronic dance music. SIPREC’s aim is to support and market all those new passionate, talented producers and established artists in the world of dance music. Founder and serial entrepreneur Abdelilah Amraoui describes SIPREC’s style as ‘The uplifting Miami sound with a mix of Ibiza’s cutting-edge noise and the warmth of Morocco’s red city Marrakech’. SIPREC has been spending a lot of time with different artists in the studio preparing their upcoming releases for November and December of this year. Expect to hear a lot from SIPREC as we head into 2012.

Maroy’s ‘Better Living’ featuring Trarius on vocals, is the first single from SIPREC and is scheduled for November featuring remixes by the likes of the one and only multi-million selling artist Ron Carroll and top-notch Dutch artists Georgio Star, Miguel O’Syrah, Nikki Visser and Dominique Base. The song written and performed by Trarius is about being in control of your own life. You are the one who decides on whether to take a right or left, and you decide on whether to take the shortcut or not. Most important thing is that you better start living your life and that’s what "Better Living" is all about in this track. A great chemistry of 2 young dedicated artists that combines music and poetry into musical art form for the dance-floor … Strange isn’t it?

Since purchasing his first vinyl records in 1999 Maroy very quickly emerged as one of Holland’s true talents. Earning recognition for his endless hard work and dedication to the Dutch scene Maroy has worked tirelessly to push his music into the clubs in Holland. DJ Maroy is well known for his energetic, sexy and hypnotic sets, playing the best of house music and deep techy sounds.

Trarius is one of the Carolina’s up and coming R&B/Soul artists. His style, demeanour, and passion can all be attributed to his humble beginnings. Born and raised in Gastonia, NC, Trarius carries his southern origins with pride. He sings with such passion, you can’t help but be moved by his sincerity to the music. His influences include legendary artists such as Stevie Wonder, Sam Cooke and Al Green.

Headlined by a remix from Ron Carroll who needs no introduction – a Chicago based singer, songwriter, producer/remixer, and well respected DJ, is known primarily on the global music circuit. Ron has worked with many of the world’s most famous producers such as Erick Morillo, Roger Sanchez, Bob Sinclair, David Guetta, and Steve Angello. In 2000, friend and producer Mazi introduced Ron to the European house scene and asked him to write and sing on Superfunk’s ‘Lucky Star.’ The track blew up worldwide and went on to sell over 3,000,000 copies. His 2008 super hit, ‘Walking Down The Street’ (‘Nike Song’), was released globally and would also collaborate with Bob Sinclair and Axwell on ‘What A Wonderful World’ and co-write music with David Guetta and Swedish House Mafia.

Georgio Star’s switch to house music was the best decision like it was sent from heaven. He signed within 6 months 14 singles including his hit-single ‘IDrum’ to various labels. His productions are hugely supported from big names in the Dutch scene like Afro Bro’s, D-Rashid, Bruze D’Angelo, Carlos Barbosa, E-Sonic and Lady Bee. Georgio is known for his energetic sets and especially his ground breaking Latin house sound. All his tracks contain pumping beats, uplifting bass lines with kicks and floor filling hooks.

Miguel O’Syrah started his musical career in Holland as a member of the highly acclaimed Hit-producers Beatkidz with several hits on their portfolio. They produced hits for well-known Dutch artists like rapstar Ali B, R&B group Sat-R-Day, Hiphop duo Lange Frans & Baas B and R&B artist Brace. He is nowadays totally focused on House-music with several releases on international respected labels like Defected, Samsobeats and Armada’s Zouk Recordings. Miguel O’Syrah also released a track with Gregor Salto called "023" on Dave Piccioni’s Azuli Records.

Dominique Base already played in many big clubs and festivals in Holland. He also performed with Laidback Luke, Chuckie, Afrojack, Fedde Le Grand and Dj Jean, just to name a few. He also did gigs in Turkey, Germany, Spain and the United States. One of his best performances was at the German Love Parade in 2009. His productions are not comparable to any other productions you hear in the clubs or on the radio, which makes him unique in the Dutch house scene nowadays.

Pascal Moreno and Tyron Kemble are two motivated upfront dj/producers who are destined to reach the top in their musical careers. Both started a training at the Pioneer DJ School Europe and started working together ever since. Their styles can be defined from sexy latin grooves, to vocal house. Always trying to be inventive in what they do most, dj-ing and producing tracks in their studio. They have set their mind on entering the house scene in 2011 and are encouraged with so much energy, love and good vibes from the people around them that it will be impossible not to hear their names in the near future.

SIPREC’s aim is to support new passionate, talented producers and established artists and on this release we present you upcoming talent Nikki Visser. With several residencies in Holland in clubs like the VIP Room (Rotterdam – NL) he is building a solid career and is dedicated to be successful in the next couple of years ahead. His remix of "Better Living" is uplifting and makes you want to hit the dance floor as soon as you hear the first snares and drums. You have been warned because there is a new kid in town!

Maroy feat. Trarius is soon available on all the biggest download portals like Beatport, iTunes, Traxsource among others …