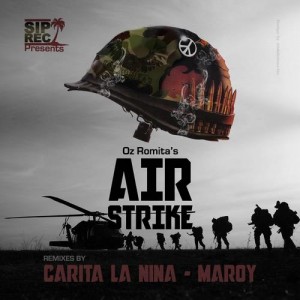 Oz Romita is ready to battle with another ‘Thrilla in Manila’ release on SIPREC! Oz Romita’s trademark is his funky touch combined with strong tech-house. All Deejays are warned cause his new track called ‘Airstrike’ is ready to bomb the dance-floors in your area!

The always smiling Amsterdam based dj/producer Oz Romita started producing not even a year ago and already has several releases at well respected international labels like Great Stuff, Repressure and Bonzai Progressive. Oz Romita is well known for his energetic sets. Throughout the years Oz Romita has shared the stage with many well known dj’s such as Carl Cox, Desyn Masiello, 16bit Lolita’s among other big names.

SIPREC asked none other than Carita La Nina for an official ‘Airstrike’ remix, resulting in techy floorfiller that will definitely will rock your shoes off! Carita La Nina is one of the Netherlands’ most popular female DJs. One of her latest singles “On Top Of The World” featuring Brittany Flickinger recently reached the number 1 spot on Dance-Tunes and stayed there for several weeks. With her upbeat personality, superb skills and buckets of talent, she stands her ground in the cutting -edge Dutch dance scene, thus blazing a trail for all women trying to carve out a career in this male-dominated industry.

Maroy’s remix of ‘Airstrike’ has some massive drums and a perfect synth that definitely will bring the Latin heat back into your life! His first release on SIPREC ‘Better Living’ was remixed by the likes of the one and only multi-million selling artist Ron Carroll. Also with his release ‘All Good’ he surprised us with the amazing and diverse range of flavoured sunny beats and vibes featuring top notch vocalist Patrick Chappell.